In August 2012, the team has been specially selected by The People’s Government of  Shenyang to be  the main attraction at the Shenyang City Air display 2012, as well as working closely with  AOPA China to help promote the budding new General Aviation industry that is in its infancy in China

Jez, one of the pilots, wearing a pair of Bigatmo sunglasses during their visit to China 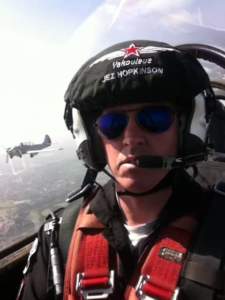 The Yakovlevs are a UK based 6 aircraft formation and aerobatic display team who have earned a reputation for excellence over the last 14 years, delighting over 35 million people in the process, across 10 countries. In 2012 they were seen by over 380 Million Television viewers over a 5 day period in China when they were displaying at Faku on the North Korean border for the first ever AOPA China Airday. Consummate believers in pushing the boundaries of high performance, they exude high standards in every aspect of their operation. The team is a specialist airborne display team flying authentic cold war Russian war-bird aircraft in precise, yet graceful combinations of tight formations and exciting aerobatics, high speed passes and breath-taking crosses.

Yak HQ is now in a brand new facility on Henstridge Airfield, in Somerset. With state of the art modern corporate facilities, it is an ideal location to meet the team, hold your own meetings or take part in some inspiring leadership development that is based on hard earned experience.
The Yakovlevs: Aviation

Yaks Aircraft
Super Yak 52 and the Yak 50
The team flies the Russian aircraft made by the Yakovlevs design bureau. These reliable and robust aircraft were designed for training and world class aerobatic competitions. Leading the Yakovlevs is the world’s most powerful Yak 52, known as the Super 52. This unique two-seater aeroplane was specifically developed for the team. Following in close formation are three single seat Yak 50’s. These world championship aerobatic aircraft were much loved for their sparkling performance and grace.